It is full of fantastic fantasy, fascinating dynamics, rich in associations and originality.

The performance contains both the absurd and the bizarre, the sincere and the lyrical – one laughs, gets provoked and touched.

Three paralyzed parachutists descend into a desert landscape. Suffering from amnesia and urban confusion they try to create a logic in their new situation. How did they get there? The quest for a purpose gets even more complicated with the arrival of a woman. And later a local arab.

The desert is a complete nothingness where life in itself is absurd. A place for existential questions, a place for dissolution and damnation, and a place for observations upon civilization. A classic metaphor in many art forms, so to speak. The show plays with these metaphors, and also with the time period where the metaphor was particularly strong. The existentialists of the 1950’s were both cool and hopelessly blindfolded in any attempt to give chaos a humanistic face. The show does not enter into existential depth, but circles around contemporary confusion regardless of time or period. Cartoon-like logic and a visual density proved to take the company to yet another level of associative communication.

THE ARRIVAL was in 2001 restaged and co-produced by in Älvsborgsteaterns Dansekompani in Uddevalla with extensive touring in Sweden.

There are no plans for further performances. 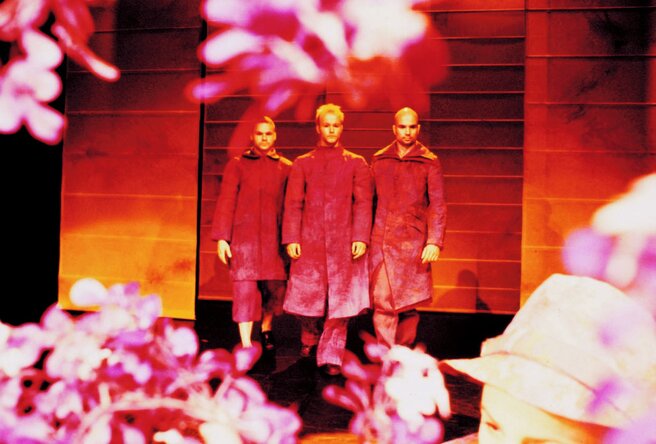 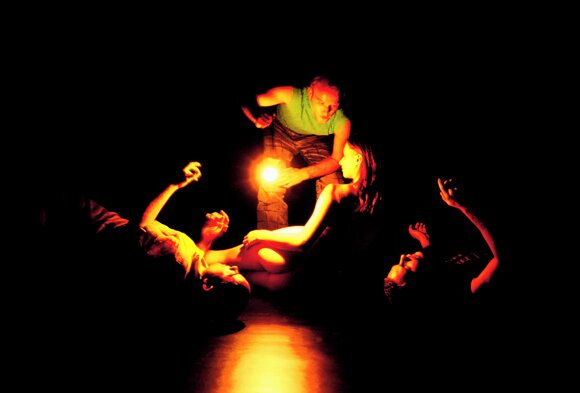